Often ideas that can change the lives of many people are the result of tragic events. As is the case with a developer from Tomsk, named Nikolai Muravyov. The young man suffered severe trauma, which not only did not break his spirit, but also helped him find a way to help many people who face mobility problems. Nikolay Muravyov told our editorial staff how he managed to create a project aimed at improving rehabilitation after stroke.

How did the idea of ​​VR GO come about?

Life itself pushed me to realize this idea. As you may have noticed, I am in a wheelchair. In 2010, at a friend’s birthday party, I unsuccessfully took a toboggan trip with a sports ice sled and crashed my back into a group of trees. As a result, I suffered a spinal fracture, three operations and a long rehabilitation process.

Due to the injury, I lost the ability to move my legs. The neurosurgeon advised me to use my imagination here. I must have imagined that I was moving my legs. At this point, fans of Quentin Tarantino’s work should remember a fragment from “Kill Bill,” in which Uma Thurman tries to wiggle her toes after a long coma, lying in the back seat of a parked car in a hospital car park. These are the tasks that, on the advice of my doctors, I have been doing for some time now. In fact, it is very energy intensive. In addition, it is not easy to remember the movements that you have forgotten. That’s when I had the idea to create VR GO.

What is the essence of your startup’s technology?

In VR GO, we use the capabilities of virtual reality to improve the rehabilitation efficiency of stroke survivors. Our developments help to make the mental representation more conscious and interesting, thanks to the gamified format and the anatomically correct transmission of movement.

Patients will be able to control the movements of a digital version of themselves and, thanks to the high level of detail in each virtual world, take it for themselves.

More than 60 people have tested the application and each of them left only positive feedback. There have been cases when relatives of patients who were helped by our developments immediately offered a large sum of money for such tools.

To create an alternative digital reality, we use the most modern VR headsets, as well as non-trivial solutions in the development of our own application. We strive to make technology as accessible as possible to everyone.

Who helps you in this project?

I couldn’t have done this alone. My friend and experienced businessman Maxim Zhdanov, as well as cybernetician Herman Schneider, whom we met at one of the accelerator events, help me in my work. I brought the project team together in 2017 – after attending a virtual reality hackathon. We also have a team of programmers who are responsible for the technical part of the development.

What are the results of VR GO at the moment and how do you see the future of the project?

We have proven the effectiveness of our project – this is probably the main achievement. Moreover, we have acquired relations and even received support from foreign authorities. For example, we were offered assistance for the release of the project on the European market. All these details of the puzzle contribute to promote the project.

We also plan to launch a mobile app. At this point, VR GO users will be able to work even through cardboard cutouts — ordinary Google map glasses that you can fit a smartphone into. All you need is a modern phone and an inexpensive cardboard cutout costing $10-20.

How did your fascination with Star Wars come about?

My passion for Star Wars goes back a long way. My fascination was catalyzed the moment I realized that my disability pension was not enough to live on. To make money, I started making custom helmets and costumes from fantasy movies. By the way, I’m not limited to Star Wars. There are also works inspired by other films in my collection, for example, Iron Man.

Today my hobby has taken a digital format and I have recently entered the NFT market. My works are now presented on the OpenSea marketplace. All revenue from the sale of NFTs goes to fund the project. Those who want to help us create tools for the rehabilitation of people with motor problems – check out my OpenSea page.

How does the process move from idea to implementation?

The creation of helmets is extremely meticulous work in which every detail is important. First I work out the idea, then I look for ways to implement it. As I work, I can refine the idea or tweak it until I get something really cool. An important place in the process is the choice of design. 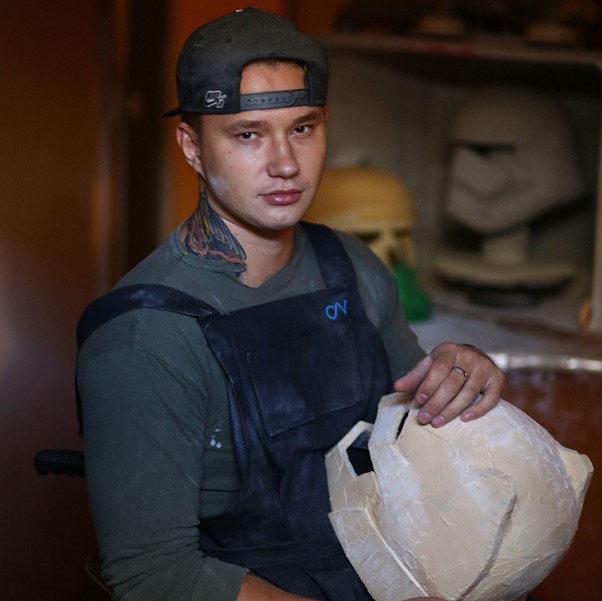 Some jobs can take six months to a year and a half, but it’s worth it. Each helmet is unique. There is no second exactly like it in the world. Helmet buyers have an exclusive opportunity to interact with the Star Wars universe and become a unique part of it. And thus, the idea of ​​the STAR MASTER TROOPER project was born.

Do you sometimes receive unusual orders? If so, what is the most unusual object you have created?

One of the most interesting works was the metal robot R2-D2. He moves his head and speaks in his own language “pilik pili piuu”. We did it for the educational team of the “Quantorium” children’s technopark, in which I also worked as a laboratory assistant.

Our R2-D2 was at the Street Vision Street Art Festival. After that, we hand over the robot to the person who funded the work.

Tell us about the creation of the STAR MASTER TROOPER helmets. What is the main idea behind the collection?

STAR MASTER TROOPER is partly a fantasy about what stormtroopers look like. Meanwhile, in the NFT collection, I also paid homage to the classic hero look.

By the way, the first headset in digital and physical form went to its Australian buyer before sales began.

What are NFTs and how do they differ from the large number of images uploaded to OpenSea?

The format of non-fungible tokens helps confirm ownership of a unique image through the fixation of information in the blockchain. At the same time, the NFT market offers some of the easiest conditions for selling and buying digital art.

All images that formed the basis of my tokens are copyrighted; they are presented in a single copy. By the way, all NFTs are not just graphics, but real physical helmets captured on video. This approach allows the buyer to purchase both digital and physical forms of the headset.

Do you have expansion plans in the NFT market?

There are certainly plans to create new collections. The NFT market continues to grow. Analysts predict that by 2025, the NFT industry will reach $80 billion. The expansion of the market is also facilitated by the development of many large companies, including Meta (Facebook).

I plan to expand my NFT initiative to use it to scale the VR GO project, through which we will help people who have lost the ability to move.

What would you say to people who have lost hope of being able to move?

I would say from personal experience – loss of hope is a path to nowhere. I’m going to give you an example. If I had relaxed in the hospital and hadn’t started thinking about other ways to improve my condition, there would have been no VR GO project, which for many has become the hope for a happy future.

Is there an opportunity to contact you to try your technology or participate in your creativity?

How is SAI.TECH, a recently listed Bitcoin mining operator, driving towards carbon neutrality?

Bitcoin Weekly RSI Sets Record For Most Oversold In History

making sense of the BTC bear market with StormGain

No comments to show.